The Story of Our Hornsey School for Girls Logos 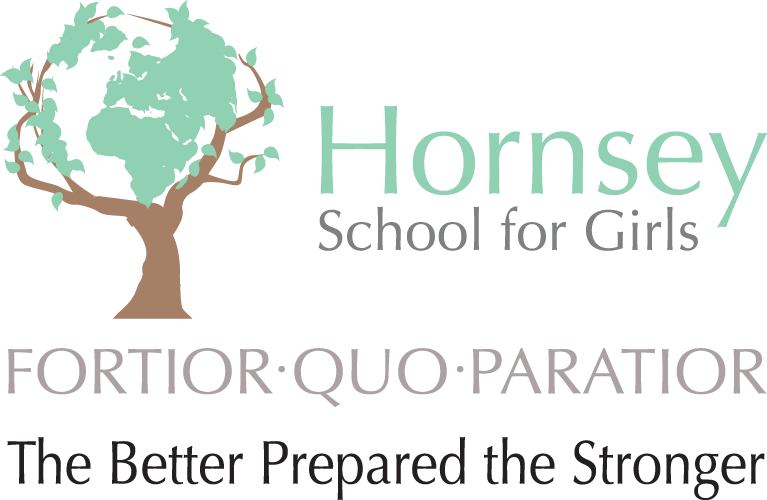 The original school logo for Hornsey School for Girls is displayed at the old school entrance on stone heraldry bequeathed to Hornsey by one of its former Headteachers. We see that the heraldry is made up of two trees above crossed swords with HSG (Hornsey School for Girls) underneath and a Latin moto underneath that. The motto 'FORTIOR QUO PARATIOR' – translates as ‘the stronger because the more prepared’. The oak trees are symbolic of Hornsey's former state as part of the old forest of Middlesex, while the crossed swords of St. Paul are from the arms of the See of London with which Hornsey was connected. The motto was granted to the district of Hornsey in 1904, incorporated into the London Borough of Haringey in 1965 and was adopted by Hornsey School for Girls.

In March 2009 the Student Leadership Team and elected School Cabinet, the Headteacher and Chair of Governors met to develop a revised logo for Hornsey which would encapsulate the ‘Hornsey spirit’ (its uniqueness) and embrace all of Hornsey’s specialisms, including its focus on the Arts, Humanities and its role as a Leading Edge school.

Since the Library opened in March 2010 the logo was moved from the previous entrance to the main school entrance where it is proudly on display and can be lit up at night for show.

In June 2015, the school undertook a revisit of the vision and updated the ethos of the school to reflect its changing context and dynamic. As part of this process, the original motto and logo was used as a starting point. The student leadership team again led on the process, looking at both the school and what they wanted students to learn from it.

Recognising the key to success is hard work, persistence, resilience, and determination,  students, staff and governors re-adopted the original motto 'The better prepared the stronger' in September 2015 and this now forms a keystone in how the school operates. We are successful because staff and students prepare themselves for the challenges ahead.